In mobile advertising it is possible to target specific audiences based on some characteristics of the users, such as the age. However, this information is not available for every users. We build a supervised machine learning model to extend the knowledge over the whole dataset. In the previous post we described how the reliable ground truth dataset was created. It looks like this: 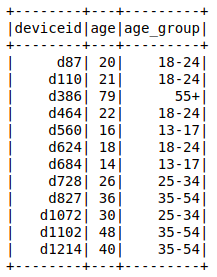 To deal with the huge amount of mobile traffic we make use of Spark, plus several Hive queries to create the raw data. The Spark ML library requires the target column to be an integer in the range [0, number of classes) and provides the StringIndexer class to transform your column.

Deal with the unbalance of the classes
Now let’s have a look at the distribution of the ground truth: 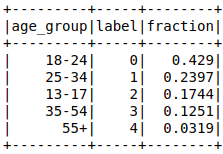 As expected, some classes are less frequent than others. An unbalanced dataset can lead to problems in the training. The model cannot learn the optimal patterns to distinguish the lower occurence class from the more frequent ones. The introduction of a weight for each class helps the model to avoid this problem since classes with few data will be considered more important to be correctly predicted. The weights are calculated with the following code. It produces a weight column in the dataframe.

Feature creation
The question to keep in mind is: how do people of different age use their smart devices? The more difference can be seen between different classes in a feature, the better it is. Only the ones which contribute to improve the prediction are kept in the final model. 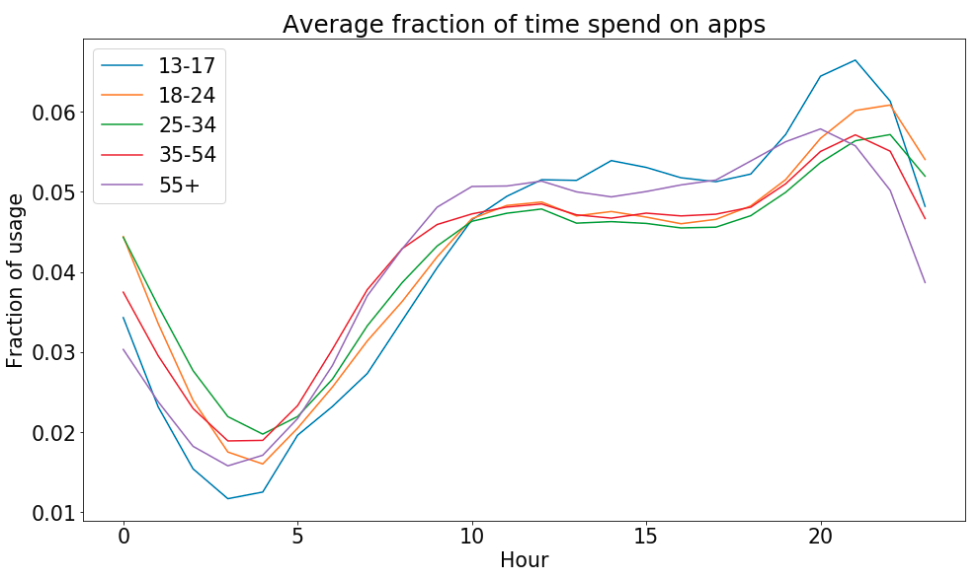 The minDF parameter of the CountVectorizer class is used to cut off apps visited by few devices to decrease the noise in the dataset and the chance to overfit.

Putting all together
Spark requires all features to be aggregated into a single vector column. Moreover, the overall process can be expressed as a single pipeline.

Train the model
As machine learning method, we start with the Logistic Regression.

The choice of the hyperparameters of the logistic regression and the preprocessing pipeline is preformed via cross validation. We use five folds and use the f1 metric to select the best result.

It is worth mentioning that the introduction and the tuning of the regularization parameters turned out to be crucial both for the performance and the stability of the model.

Trust the model
We want to know, if the model and the ground truth are reliable. Therefore, we have a look into the weights of the trained Logistic Regression Model. These weights can be interpreted as importance of the features. The top ones are shown in the picture below. Thus, we can observe the most relevant aspects of our data which allow the model to discover the age behind a certain device.

As you can see the best features of each class are the apps used. Due to the bag of words preprocess on this feature, every apps is a distinct input, so the weights in the table are directly related to the discrimination power derived by the usage of that app. Moreover, the list makes extreme sense based on naive expectation. Solving your math homework is mostly a task you want to support with an app when you are young. In certain periods of your life you will probably do big expense (e.g. an house or a boat) and you are more likely to check your financial balance with more attention. Games and sport will still be with you during your mature age and at some point you will have enough patience to appreciate the old classic card games. This gives additional confidence in the behavior of the model.

Analyzing the output of the model is very helpful, especially in the cases it is wrong. In the plot you can see the distribution of the difference between the real age and the estimated age_group. Keep in mind that every class spans about ten years. Therefore, the range from -10 to 10 corresponds to adjacent misclassified classes. For example, if the age of the device is 36 and the model predicts the class 25_34 we have a distance of 36 -34 = 2 ∈ [-10, 10]. Big mistakes, spanning more than one class occur rarely in comparison to the adjacent-like mistakes. 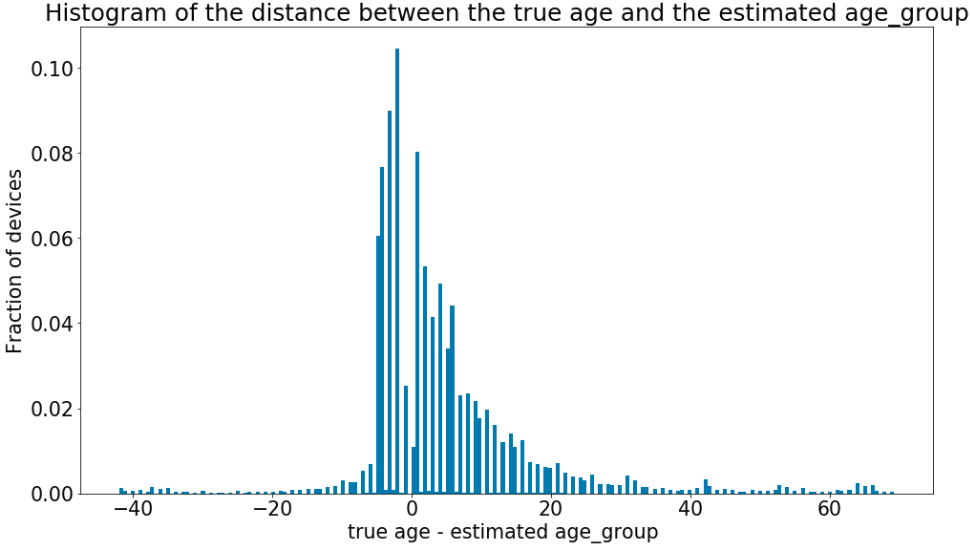 When we analyze those devices we see that their app usage would be commonly associated to the other classes. Well, in the end it is not important how old you are, but how old you feel.

These differences are not necessarily an indication for overfitting (that can be excluded because in the test set the distributions are very similar). In fact, the ground truth is a special part of the entire dataset because it contains the devices which visit the apps that provide the age information. With other words, the ground truth has a bias with respect to to the final dataset which the model is applied on. To fix the bias, we reweight the ground truth distribution using the shape from the other dataset. Since the output distribution is country-dependent, the reweighting is performant separately for each country.

After the reweighting is done independently for each group, we calculate a threshold. The threshold corresponds to a certain precision and is determined for each class and country. Therefore, we can predict the age group of all devices for each country and classes with the same confidence. Different precisions relate to different thresholds and recall.

Put everything into production
We put the train-predict structure into production creating an Oozie pipeline which triggers a Spark job on a daily basis. Thus, as we collect new data (new devices and apps) the features are recalculated with the most recent information and a new training is performed. A report of the performances is created to monitoring the status and detect cases of unexpected behaviour.

A similar procedure, with all the adaptation to the case, is constructed for the gender case. But that’s for another post.