In mobile advertising it is possible to target specific audiences based on some characteristics of the users. Here we are focusing on the age. Some apps provide the year of birth of their users. We actually do not know, where those apps derive the age from. But often, they require a registration step where you would provide your year of birth. However, these informations are only given on by a subset of apps during the bidding process. To increase the available targeting audience we use the information we get on the small subset of devices to infer the age of other, unknown users. To achieve this, machine learning comes into place.

To train a supervised machine learning for infearing the age:

In this post, we only discuss the ground truth selection step, leaving the feature creation, the tuning, the training and the prediction of the model for the next time.

Introduction: the importance to seek the truth
The ground truth has to be reliable or:

Reliability is not a statistical quantity that you can find in textbooks. To summarize the concept in one phrase, we could state that your data are reliable as long as all your results follow an explainable behaviour without any inconsistencies. This is based on the fact, that we often find patterns which imply some problems in the data. We want to discover all of those patterns and exclude them from our dataset.

We can structure the age information unreliability in two ways:

1) Inter app reliability:
In the plot below you can find some examples of the age distribution for six apps. 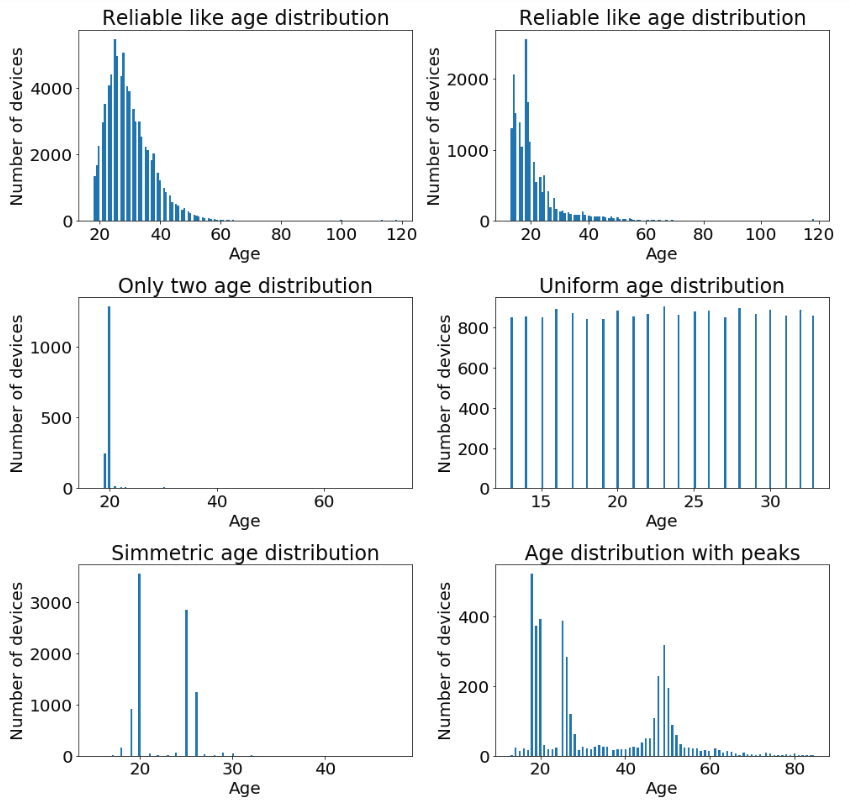 Different apps clearly show different age distributions. However, it is clear that some of the distributions in the plot do not make sense. Why would people from 17-18 correspond to more than 95% of the total users of the app? (What happens to the 16ties? or 19ties?) Why would apps have the same numbers of devices for every age in a specific range? These must be very special apps, or the data do not correspond to the truth. Therefore, we want to exclude these apps. We only make a statement of rejection or acceptance when there are enough users observed in the app to make statistical relevant observations. In case the number of users is too low we do not consider them in the study and in the final ground truth selection.
This is not a big issue since the devices contained in these apps are few by definition, so we do not cut off too many data in this way.

Let’s describe the main patterns we discover in the data and how we get rid of them creating ad hoc variables via pyspark functions. Due to the high volume of data, spark is the natural choice which allows us to scale over the entire dataset.

It surprises us to see that the ammount of apps with an unrealistic distribution is so high. However, since the model benefits from the chirurgical operation and we still have plenty of devices to train on, we do not hesitate to reject those apps.

2) Intra apps reliability
The next step is to exclude the apps which are not consistent with the other apps. This happen when the same device is observed with different age over different apps.

To detect them, we translate the age into the 5 classes which we will use in the business case: 13_17, 18_24, 25_34, 35_54, 55+. The fraction of devices observed with more than one class in the entire dataset is calculated for each app. The apps with an high fraction are removed together with the remaining devices with a non unique age class. There are very few apps and devices excluded by this process, thanks to the already very accurate selection operated in the inter app reliability step.

We conclude this section showing the age distribution before and after the entire selection. 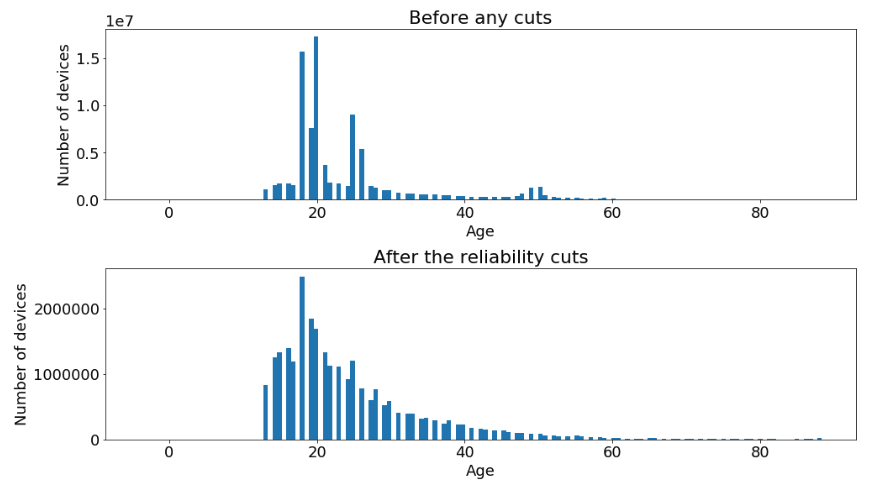 Production
All these rules are put into production via an oozie pipeline which calls a spark job that implements all the described selections. The final output are two tables, one which contains the deviceID and the age of the user and another one with the apps and a flag which states the reliability status (used for monitoring purpose). Every day, as new data come in, the oozie pipeline processes the data combined the last two weeks and updates the two tables.

Now that we have a consistent ground truth we can build up a supervised machine learning model which can be used to estimate the age on devices where we do not have any reliable age information. This post is already too long, so we will continue the discussion on the next one, stay tuned.