At Adello we are processing a lot of data. In a perfect world, we could just take them and use them directly for the benefit of our customers. In reality, the data is not always correct and to produce reliable output it is necessary to filter out this inconsistency. In this post we describe an example of the quality selection we perform at Adello, underlining the benefits we gain from it.

In a previous post we introduced the way we identify a device for advertising targeting purpose. In summary, we use the Android Advertising ID and the iOS Identifier for Advertisers. In the rest of the post we call these random pseudonyms as deviceID since we use them as an identifier of a smart device (mobile, pad, etc…).

In particular, it is expected that:

The base data for all future investigations can simply be described as a list of visits of deviceID and apps at certain times. 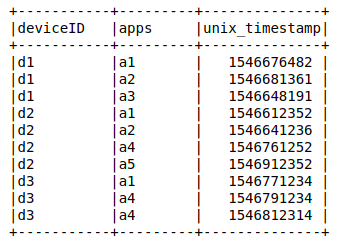 Quering the dataset via hive or spark we can test if the data looks like what we expect. The goal of the study is to identify a set of pattern which allows us to select only reliable device identifiers and filter out those which are not real, either because of technical problems or due to fraudulent behavior. Let’s go into details about the discovered patterns.

Of course the same unreliable deviceID can be flagged by more than one pattern. However, there is not a single method among those which can be completely substituted by the others. Indeed, we include all of them in our deviceID reliability filter (except the randomly generated one since there are no devices which are randomly generated).

Put everything into production:
We put this quality filter selection into production creating an oozie pipeline which calls the hive queries that implement the described methods. The pipeline runs on a daily base, acquiring new data and filtering out the unreliable device identifiers. To monitor the amount of the rejected devices and apps we store all the calculated information such that it is easy to trace back for which reason the data have been flagged as unreliable.

To conclude we could paraphrase what the ancient Romans use to say: business sano in data sano.